Homecoming and the Rich History of HBCUs

Maintstream America Is Finding Out What HBCU Alums Have Always Known 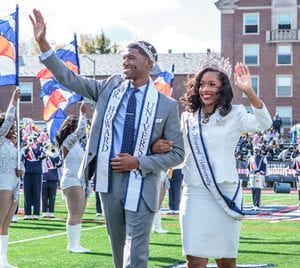 Homecoming kings and queens are an key part of the HBCU homecoming tradition. For decades, Ebony magazine published the photographs of newly crowned homecoming queens from HBCUs across the country. The generally week-long event can include activities such as a football game against a favorite rival, alumni class reunions, fish frys, parades, parties, and the latest fashions, along with service projects and philanthropic gift presentations.

The well-received release of Beyon­cé’s documentary Homecoming earlier this year may have sparked special in­terest in the Historically Black Col­leges and Universities (HBCUs) to which she pays tribute throughout the film. She brought to the mainstream what HBCU alums already knew.

Historically, HBCU homecomings were intended for alumni to show their school spirit during a football game. Since the 1920s, that simple college event has evolved into a sev­en day experience.

An HBCU homecoming is more than attending a football game before heading back to the dorm to cram for upcoming midterms. The week-long event is only held once a year but is taken seriously by the student body and alumni. At an HBCU, having a successful homecoming is all about gaining a love for the institution by embracing its culture. Through histo­ry, style, and music, students develop a sense of unity and pride for their his­torically black college or university.

After weeks of unmanageable work hours and early-morning lectures, homecoming gives students the oppor­tunity to unwind and enjoy the playful side of college life. There will be parties, parades, and most importantly, there may be a break from a few classes.

Some might think that canceling class for the week defeats the purpose of advanced education, but learning involves more than laboring through textbooks. Experiencing the culture of the institution is a learning tool just as much as any class assignment.

For instance, homecoming is a big deal for alumni just as much as it is for current students. Graduates travel miles across the country to come back to celebrate their alma mater. Alumni are eager to see how the school has im­proved since their college days.

As a result, students have the op­portunity to meet well-established graduates who are willing to share their (college) life story. By speaking with alumni, young and energetic stu­dents grow a love for the institution and may provoke efforts to enhance it for the next class.

The obvious common factor be­tween alumni and current college stu­dents is that they are living on a legacy that their black predecessors built for black education when it was denied elsewhere.

The Second Morrill Act of 1890 re­quired that land-grant institutions be provided for black students if denied college admission. Homecoming is a celebration of black history and an op­portunity to rejoice in the present.

For centuries, African Americans were not given the right to advance their education, and now that black people have surmounted such tribula­The tions, HBCU students should rejoice at any opportunity.

In 1875, William Hooper Councill founded the Huntsville Normal School, which is known as Alabama A&M University today. Councill was a former slave who had a desire and vision for descending generations of African Americans to pursue higher education.

Eighteenth-century philanthropist Richard Humphrey shared Councill’s vision when he granted $10,000 to 13 Quakers to create an institution that educated Americans of African de­scent— Cheyney University of Penn­sylvania, the first HBCU.

Homecoming helps undergraduates and alumni realize that rich history breeds a legacy. Although classes might be canceled, the essentials of home­coming can evoke the pursuit of educa­tion more than any professor.

There is no such thing as an HBCU homecoming without black music. Such art is showcased at none other than the football halftime show. It is guaranteed that the university band will rock halftime by playing instru­mentals from today’s popular hip-hop and R&B music as well as the genres’ relevant throwback songs.

The colleges take it even further by showcasing African-American dance styles. One of the most anticipated events is the Greek step show. Each Greek-letter sorority and fraternity puts on an entertaining yet competi­tive step dance, a percussive dance in which members use their entire bod­ies to produce rhythm.

The show might seem like a simple crowd-hyping performance, but the step show mirrors a significant part of black culture. Besides the fact that stepping derives from Caribbean and African culture, the national Pan-Hel­lenic comprises nine Greek-letter or­ganizations, often referred to as the Divine Nine, that have been estab­lished by graduates of HBCUs over a century ago. The step show preserves the black performing arts culture, which is why it is one of the main events for the week.

It doesn’t have to be homecoming week at an HBCU for the students to express their style. Rocking your best outfits is a form of self-expression. It shouldn’t be surprising that the student body goes all out for homecoming.

Many students plan several outfits months in advance. With the amount of time and energy invested into ward­robe, you would think that it’s an award show.

The fashions are just part of the fun; but really, homecoming is about cele­brating the culture and history of the college/university. Students are proud of the legacy they are leaving and want to showcase that through style that is not at all different from a Met Gala or a run­way show for Paris Fashion Week. If models and celebrities have no shame, then neither should students.

With this planning comes a friendly competition of who can dress the best. Now, there is no pressure to dress up; however, if a student does decide to compete for the most likes on Instagram, they have to give it all they have—or as the fashion world says, “Apply Pressure!” and never let up. It’s usually a friendly competition, howev­er, filled mostly with appreciation rath­er than envy.

What were once built on slave plan­tations are now accredited institutions dedicated to the black and educated. HBCU homecomings will always have a significant distinction due to the rea­son behind the celebrations.

In fact, many non-HBCU partici­pants travel to predominantly black colleges during homecoming just for the sake of taking part in unforgetta­ble festivities. It’s important to know the reason behind the work that is put into homecoming. Arguably, homecoming is just as important as attending class. Yes, it’s a fun outlet before midterm week yet the ulti­mate mission is to spread love and create unity.

Whether you are a Greek eager to stroll through the crowded after- parties or a 20-year alumnus who has been donating to the school since graduation, homecoming is a chance for everyone to learn and grow.

From Claflin University to Xavier University, young black minds across the country are taking a break from the books over the next few weeks to enjoy a well-deserved week full of cul­ture and love. It is all positivity at an HBCU homecoming.