Great Example of Collective Black Power in US History 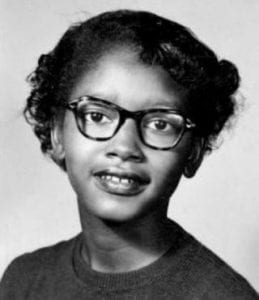 Teenager Claudette Colvin had refused to give up her Montgomery bus seat months prior to Rosa Parks’ refusal.

The arrest of Rosa Parks on Dec. 1, 1955, was the spark that launched the 13-month mass protest that spurred the black community of Montgomery, Ala. to work together in an astounding display of unity to improve conditions for blacks on city buses. The boycott brought the city’s economy to its knees and ended with the US Supreme Court ruling that segregation on public buses is unconstitutional.

The Community Wasn’t Ready Before Parks

Before Rosa Parks was 15-year-old Claudette Colvin, arrested on March 2, 1955, for refusing to give up her ‘white’ seat. But her case wasn’t pur­sued by the NAACP because she had assault charges against her. However, this is how Colvin’s classmate, Annie Larkins Price, described the encoun­ter: “The bus was getting crowded and I remember the bus driver looking through the rearview mirror asking her [Colvin] to get out of her seat. She didn’t say anything. She just contin­ued looking out the window. She de­cided that day that she wasn’t going to move. There was no assault.” The state of Alabama dropped the segregation issue against Colvin and pursued a case of assault and battery. 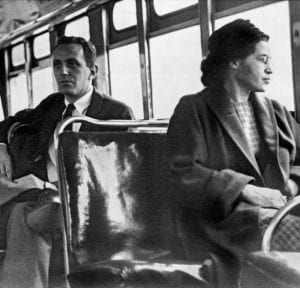 Left: Rosa Parks takes a victory ride on a Montgomery, Ala. city bus after the US Su­preme Court struck down the city’s segrega­tion policy on public transportation. Although many school children were taught that Parks refused to give up her seat because she was too tired after a hard day’s work, the seam­stress had been actively engaged with the Civil Rights Movement in Montgomery and was deemed the ideal candidate to test the city’s racist policy. Right: Parks upon her arrest for refusing to give up her bus seat to a white patron on December 1, 1955.

Parks Was Inspired by Claudette Colvin

Parks had been a lifelong worker for the NAACP and had taken a special interest in the Colvin case, according to www.historylearningsite. co.uk. At the time of her arrest, Parks had just finished a course on race relations at the Highlander Folk School near Monteagle, Tenn. She had become a seamstress because that was the only work she could find in segregated of Montgomery, although she had been educated at the all-black Alabama State College. In his memoir, Dr. Martin Luther King, Jr. wrote, ‘‘Mrs. Parks was ideal for the role assigned to her by history,’’ and because ‘‘her character was impeccable and her dedication deep-rooted,’’ she was ‘‘one of the most respected people in the Negro community.’’ 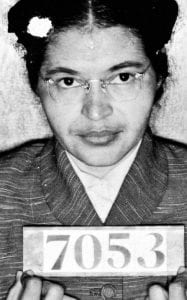 Before the 13 Months, There Was a One Day Boycott

After Parks’ arrest, city leaders called for a one-day protest of the city’s buses, held on December 5. Leaf­lets were handed out throughout the black community, according to a his­tory recounted on a Stanford Univer­sity website (kinginstitute.stanford.edu). E. D. Nixon, past leader of the Montgomery branch of the NAACP, called local black leaders, including local pastors Ralph Abernathy and King, to a planning meeting, which was held at King’s church, Dexter Av­enue Baptist Church. The boycott was a resounding success: 90 percent of Montgomery’s black citizens stayed off the buses. That afternoon, the city’s ministers and leaders met to discuss the possibility of extending the boy­cott into a long-term campaign.

Just 26 years old at the time, King had just received his doctorate in sys­tematic theology from Boston Univer­sity and had arrived at Dexter Avenue Baptist Church for his first ministerial position. He was elected leader of the new group, the Montgomery Improve­ment Association. Parks explained why he was picked: ‘‘The advantage of hav­ing Dr. King as president was that he was so new to Montgomery and to civil rights work that he hadn’t been there long enough to make any strong friends or enemies.’’

After unsuccessful talks with city commissioners and bus company offi­cials, on December 8, the MIA issued a formal list of demands: courteous treatment by bus operators; first-come, first-served seating for all, with blacks seating from the rear and whites from the front; and black bus opera­tors on predominantly black routes. The demands were not met; the long- term boycott was on.

City officials in Montgomery tried to undermine the boycott. Black cab drivers had charged the same as the buses in an effort to get black people to work if they couldn’t ride the buses. However, city officials declared that the minimum fare that a cab driver could charge was 45 cents —so the 10 cents they were charging was made illegal. To get around this, MIA introduced a private taxi plan—a carpool system.

Following the advice of National Baptist leader Rev. T. J. Jemison, who had organized a carpool during a 1953 bus boycott in Baton Rouge, the MIA developed an intricate carpool system of about 300 cars, serving a popula­tion of between 40,000 and 50,000 African-American residents. Organiz­ers of the carpool established “dis­patch stations” in African-American neighborhoods throughout Mont­gomery where boycotters could gather in the mornings to be transported to work. Similarly, in the evenings, “pick- up stations” served the same function for the return home.

In early 1956, the homes of King and E. D. Nixon were bombed. King was able to calm the crowd that gath­ered at his home by declaring: ‘‘Be calm as I and my family are. We are not hurt and remember that if any­thing happens to me, there will be others to take my place.” City officials obtained injunctions against the boy­cott in February 1956, and indicted over 80 boycott leaders under a 1921 law prohibiting conspiracies that in­terfered with lawful business. King was tried and convicted on the charge and ordered to pay $500 or serve 386 days in jail. Despite this resistance, the boycott continued.

Although most of the publicity about the protest was centered on the actions of black ministers, women played crucial roles in the success of the boycott. Women sustained the MIA committees and volunteer net­works. Mary Fair Burks of the Wom­en’s Political Council also attributed the success of the boycott to ‘‘the nameless cooks and maids who walked endless miles for a year to bring about the breach in the walls of segregation.’’ In his memoir, King quotes an elderly woman who proclaimed that she had joined the boycott not for her own benefit but for the good of her chil­dren and grandchildren.

Gandhian Nonviolence Was Born in Montgomery

National coverage of the boycott and King’s trial resulted in support from people outside Montgomery. In early 1956 veteran pacifists Bayard Rustin and Glenn E. Smiley visited Montgomery and offered King advice on the application of Gandhian tech­niques and nonviolence to American race relations. Rustin, Ella Baker, and Stanley Levison founded In Friend­ship to raise funds in the North for southern civil rights efforts, including the bus boycott. King absorbed ideas from these proponents of nonviolent direct action and crafted his own syn­theses of Gandhian principles of non­violence. He said: ‘‘Christ showed us the way, and Gandhi in India showed it could work.’’ King said of the bus boycott: ‘‘We came to see that, in the long run, it is more honorable to walk in dignity than ride in humiliation.”